The Australian Dollar was relatively little-changed – limping a bit higher but struggling to sustain any significant momentum – as the RBA lifted the target cash rate from 1.85 to 2.35 percent. AUD/USD erased some of its earlier intraday losses, but a convincing rally did not appear to materialize in earnest.

Economists’ median forecasts favored a 50bps rise ahead of the announcement. At the same time, futures markets fully priced in a standard 25bps rise while signaling a 69 percent chance – that is, a better-than-even probability – of getting double that.

The market-implied three-year policy curve has been little-changed since the RBA convened in early August. That appears to underscore the muted reaction to an outcome that was seemingly well-anticipated, and which may not materially change the markets’ outlook for the near-term policy path from here.

Traders now expect the RBA to bring the cash rate to 3 percent by the end of 2022 and continue to increase borrowing costs next year. The tightening cycle is seen peaking at about 3.8 percent by the middle of 2023, with a pause thereafter until the calendar turns to 2024.

The Aussie has not been especially responsive to RBA rate announcements over the past year, with an average price change of less than 0.1 percent in the 30 minutes after decisions were announced. Notable exceptions of sizable swings between 0.5 and 0.8 percent were recorded on just 3 out of 12 occasions.

Rather, broad-based swings in market-wide risk appetite have appeared to be a lot more influential on the sentiment-sensitive currency. Indeed, the 20-day rolling correlation between an average of AUD’s value against its top counterparts and the MSCI World Stock Index now stands at 0.70.

That may translate into a narrowly supportive picture in the immediate term. Bellwether S&P 500 stock index futures are pointing convincingly higher as US bourses prepare to reopen following the Labor Day holiday, which kept them shuttered Monday.

Still, overall positioning appears to favor a downside bias. AUD/USD is digesting after testing support near 0.6565, following a break below the long-standing range bottom at 0.6837. A further downside push may target the swing low at 0.6678. A retest of 0.69 seems necessary to neutralize selling pressure. 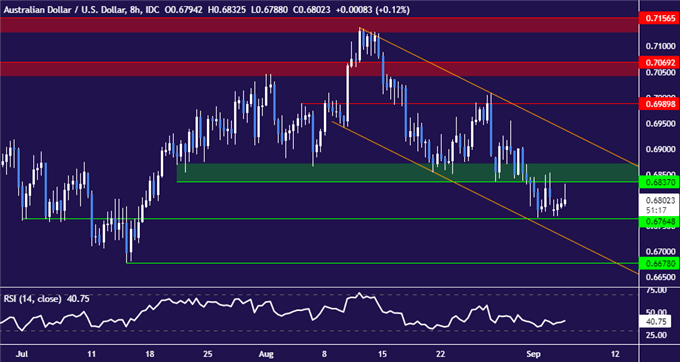 — Written by Ilya Spivak, Head of Greater Asia at DailyFX.com

How to Be a Million-Dollar Negotiator