Bryan Cranston and Aaron Paul are forever enshrined in bronze in the city of Albuquerque — something conservatives there are up in arms about, claiming the statues glorify meth.

Late last month, Mayor Tim Keller unveiled 2 statues to honor the ‘Breaking Bad’ stars — they’re now on display at the Albuquerque Convention Center — after a ceremony where BC and AP were actually on hand to pose with their metal counterparts. 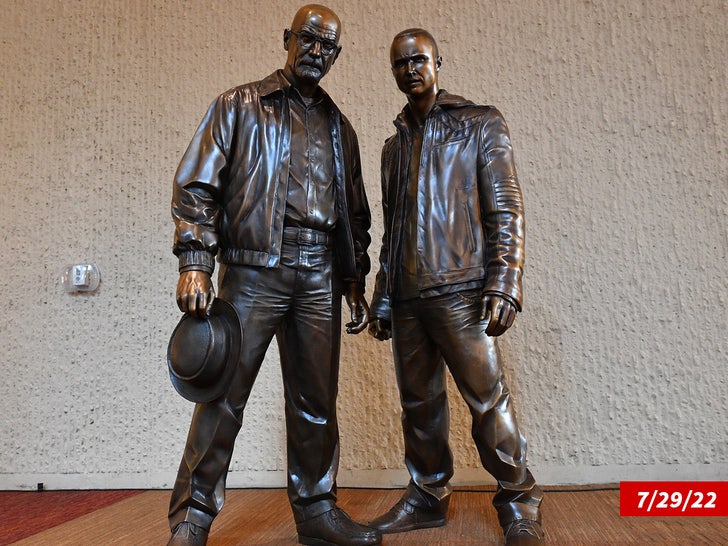 It was a kitschy, fun thing that seemed fairly innocent — as a shout-out to the actors and show for putting a spotlight on their city and state — but now, some Republicans in the state are fuming over the honor.

Conservative radio host Eddy Aragon and state representative Rod Montoya say the statues send the wrong message about who should be glorified in the community.

Montoya says “meth dealers” shouldn’t be the shining example in Albuquerque, and Aragon adds … “It’s not the type of recognition we want for the city of Albuquerque, or for our state.”

Aragon goes on to gripe about how city officials tore down a controversial statue of Albuquerque’s first Spanish governor, Juan de Onate, because he was a conquistador … but now turn around and throw these two fictional characters as proverbial beacons.

This sort of backlash was actually expected, Mayor Keller warned of this when they were first getting unveiled, saying he understood, but defended having Jesse Pinkman and Walter White statues because of the cautionary tale they represented, and the jobs they gave to NM.