New York Magazine calls out ‘nepotism babies’ Dakota Johnson, Zoë Kravitz and more: ‘She has her mother’s eyes, and agent’


New York Magazine‘s end-of-year cover has taken a daring stance, choosing to call out the “nepotism babies” of our age.

Titled The Year of the Nepo Baby﻿, the cover spotlights actors and musicians alike who have gained fame thanks to their famous parents and connections.

Throughout, the article quotes industry insiders who reveal how ‘nepotism babies’, also dubbed ‘nepo babies’ for short, often get an unfair leg up thanks to their name and connections.﻿

“A lot of the children of famous people are not good,” one casting director admitted.

Meantime another recalled, “Someone once said to me, ‘We should hire so-and-so because their parents will come to the opening night.'”

The article goes on to make some fiery claims, like “This is the nepo baby’s credo: Try, and if at first you don’t succeed, remember you’re still a celebrity’s child, so try, try again.”

It even quotes the tagline, “She has her mother’s eyes. And agent.”﻿

Online, viewers are divided over the article.﻿

“Thank you. It’s important for everyone young and starting out to realize how little of a shot they have on getting jobs when the politics in Hollywood are so specific,” one person wrote on Instagram, in support of it.

Meantime, another person on Twitter shared, “This is nothing new, though. Angelina Jolie, Sean Astin, Drew Barrymore, Jennifer Anniston, etc. Hollywood always has and always will be full of nepo babies.”

Throughout the year, many of Hollywood’s ‘nepo babies’ have gone to great lengths to insist they worked hard for their success.

“It’s weird to me to reduce somebody to the idea that they’re only there because it’s a generational thing,” the model and actress said.

“It just doesn’t make any sense. If somebody’s mum or dad is a doctor, and then the kid becomes a doctor, you’re not going to be like, ‘Well, you’re only a doctor because your parent is a doctor.’ It’s like, ‘No, I went to medical school and trained,” she said.

“At first it made me sad,” she said in an interview with Net-A-Porter. “I try not to let it get to me because I obviously understand that I’m in such a lucky position.”

She added, “A lot of people [in a similar position] have proven themselves over the years, so I’ve got to keep going and make good work. It’s so early in my career, I don’t have much to show yet, but hopefully one day, I’ll be really proud of the stuff I’ve done by myself.”﻿ 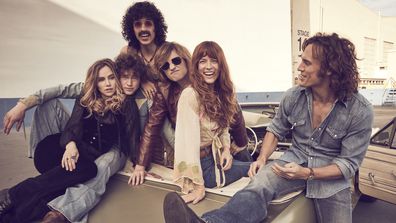