On Today Extra this morning, ﻿the Bachelor host revealed what drove him to make the change from his usual brown hair to platinum blonde.

“﻿I had Dr Joëlle Gergis on my podcast this week, she’s one of the lead authors of the IPCC [climate change] report… and after that podcast, my hair turned white,” Günsberg joked.

Watch the video above.﻿

After insisting to host David Campbell that his “Warholian” new hair isn’t “blondey white” but platinum blonde”, he explained:

“There’s a thing called ﻿’continuity’ in television, right, and when we’re making a show like The Bachelor, I’ve got to keep my hair the same.”

Günsberg said now the show is in the bag, and it has finished filming, he can do whatever he likes to his hair.

Günsberg debuted “the hair” on Instagram on November 2, and his fans could not hold back their thoughts.

“Silva daddy,” one coined the new look, quite aptly.

The TV presenter, 48, is married to hair and make-up artist Audrey Griffin, ﻿though he didn’t let whether it was his wife who did the dye for him.

The pair married in 2016 and share their son Wolfgang ‘Wolfie’ Günsberg, who was born in August 2019.﻿ He is also the step-father to Griffin’s 18-year-old daughter Georgia.

During his chat, ﻿Günsberg also spoke about his Acast podcast Better Than Yesterday, which has just reached 10 million downloads.

Günsberg launched Better Than Yesterday in 2013 and has been devoted to producing episodes to fans multiple times a week ever since.

“I’m so grateful. Ten million is a huge number﻿ [of downloads] for an independent podcast,” he said, noting that as well as him, it’s just a small team he works with to get each episode out,” he said. 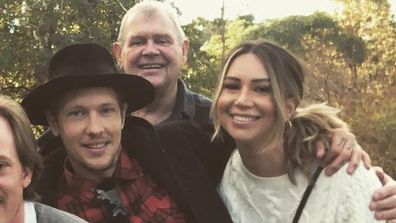 Lizzo’s Acceptance Speech at the 2022 PCAs