Ben Stokes said captain Jos Buttler has “created his own legacy” and that England are “lucky to have him” after the team won the T20 World Cup to become dual white-ball world champions.

Stokes hit an unbeaten half-century, including the match-winning single, as England beat Pakistan by five wickets at the Melbourne Cricket Ground on Sunday – three-and-a-half years after they defeated New Zealand on boundary countback to win the 50-over World Cup at Lord’s under Eoin Morgan.

England are the first men’s side to hold both white-ball trophies simultaneously, with Stokes hailing the way Buttler has taken the team on since he became permanent skipper in late June following Morgan’s retirement from international cricket.

Stokes told Sky Sports: “When the great man [Morgan] stepped down, you look at how quickly Jos has managed to take control of the team and progress it from the legacy Morgs has left. Jos has now created his own legacy. He’s a T20 World Cup-winning captain and he is incredible.

“It shouldn’t be taken for granted how hard it can be to make tactical decisions under pressure and 95 per cent of his decision-making has been absolutely right.

“He is a guy everyone follows in the field and with the bat he has put in some match-winning performances. We are lucky to have him.” 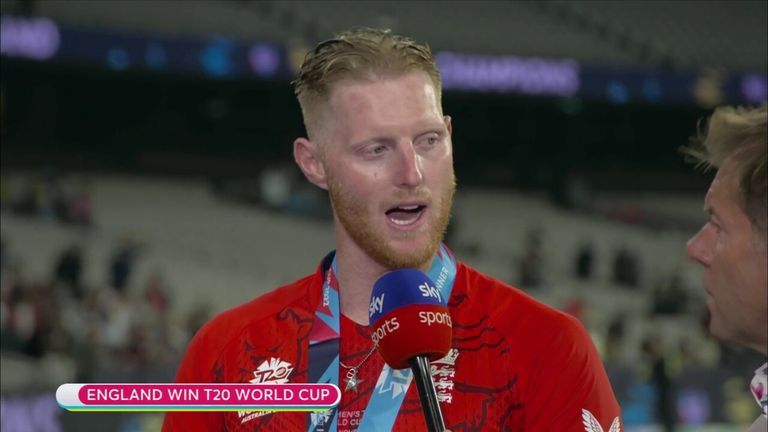 ‘Stokes is the ultimate competitior’

Buttler was equally about glowing Stokes after the all-rounder’s 52 not out off 49 balls took England to their target of 138 with six balls to spare.

Stokes had also marshalled tricky run chases against New Zealand in the 2019 World Cup final and the Ashes Test at Headingley later that summer, as well as against Sri Lanka a week ago to secure the win that clinched England’s place in the semi-finals.

Buttler said: “Who else but Stokes to see us through? The guy can soak up pressure. He is the ultimate competitor in everything he does. He has a hell of a lot of experience to bank on and he can take a lot on his shoulders. He timed things perfectly.

“That impetus he and Moeen Ali gave us [during a fifth-wicket stand of 47 off 33 balls] I think took the game away from Pakistan.”

England’s hopes of lifting the T20 World Cup for a second time – they previously won it in the Caribbean in 2010 – “looked a million miles away” according to Buttler after a timid defeat to Ireland at the MCG last month, but after a rained-off game against Australia two days later, Buttler’s side reeled off four victories in a row.

Buttler said: “This felt a million miles away after Ireland – that was a really tough defeat to take – but the huge character we showed in must-win games has been amazing.

“Every game since we have improved and got better and better, peaked at the right time and are stood here as deserved champions. It has been a fantastic tournament.

Buttler: Victory is the stuff you dream of

“It’s the stuff you dream of. It sounds so cheesy but it’s what you dream about growing up, to have the opportunity to be in this position and then to go and win it. It’s just amazing,” Buttler added.

“I am immensely proud of everyone here. It has been a long journey and there have been a few changes of how we have played over the last few years, and we are reaping the rewards of that. 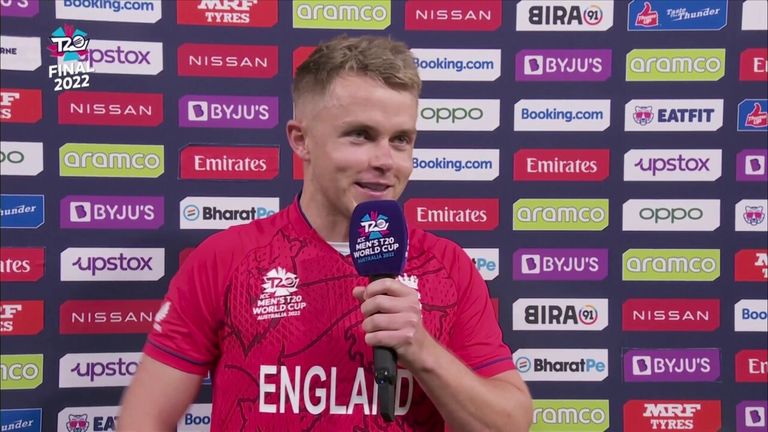 On left-seamer Sam Curran, who was named Player of the Tournament after taking 13 wickets, including three in the final, Buttler said: “He has had the most outstanding tournament. He has led the attack fantastically well, bowled all the tough overs. We have all just jumped off the back of that.

“We have scored runs when we have needed to, got off to some really good starts in a few of those games and in the last three games, especially, Adil Rashid has been outstanding for us.

“He is always the guy we have thrown the ball to make things happen and his performance in the final [taking 2-22 from four overs] was outstanding. [Head coach Matthew Mott] has fitted in really well. He gives us great freedom to go out and trust ourselves.”

On the final, Stokes said: “When you chase totals like this, you can forget what goes on before and the way all the bowlers bowled [to restrict Pakistan] was the reason we didn’t feel under too much pressure in the chase. I didn’t feel like it was out of our hands at all. 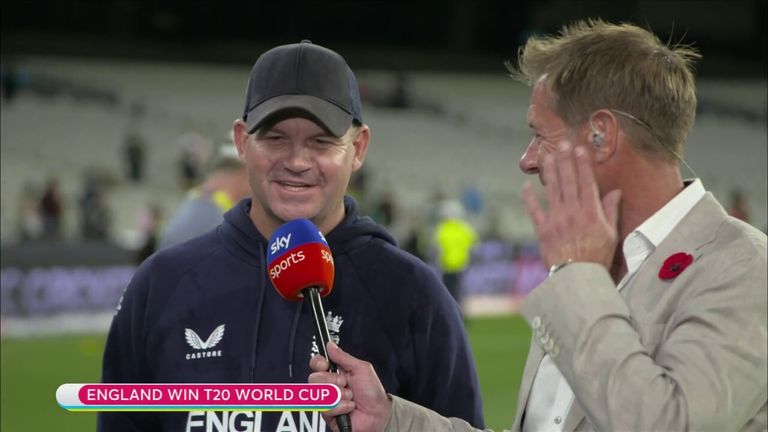 “We are old enough and wise enough and have played enough cricket to be able to go into any situation and back our ability. I tried to make sure I stayed there as long as I possibly could. It’s easier when you have a batter in at the end of the innings. It’s never really panic stations when it’s under eight runs an over.”

Stokes: We have lived up to the challenges thrown at us

Stokes eliminated any England jitters when he hit successive boundaries – a four and a six – off Itfikhar Ahmed at the end of the 16th over to reduce the requirement to 28 off 24 balls.

Off-spinner Iftikhar was only bowling because fast bowler Shaheen Shah Afridi had pulled up one ball into that over after suffering the effects of an injury he had sustained taking the catch to remove Harry Brook at long-off.

Stokes added: “There was always going to be a time where we had to attack an over and when Shaheen unfortunately went off it was obvious what we had to do. That was the over.

“The players are the ones with the medal, but no team is complete without the people who put in the work behind the scenes and we are all going to leave the MCG World Cup winners.”

“There was a little blip on the way, but the best teams take it on the chin and don’t let it affect them. They let it go and move on to the next challenge. In tournaments you can’t carry baggage with you.

“I feel we have lived up to all the challenges we’ve had thrown at us throughout this tournament.”