Hearts vs Hibernian: Who will come out on top in the Edinburgh derby? | Football News


Ahead of the 333rd Edinburgh derby, Sky Sports reporter Luke Shanley looks at who could come out on top as Hearts take on Hibernian at Tynecastle Park…

It would be wrong to start this preview to the first Edinburgh Derby of 2023 without wishing Hearts goalkeeper and captain Craig Gordon all the best with his recovery from a double leg break sustained in the Christmas Eve draw against Dundee United. The Scotland international turned 40 on Hogmanay and should have been looking forward to his 23rd appearance in this fixture, hopefully something that will come next season.

In the meantime, Hearts have replaced Gordon with former St. Johnstone No 1 Zander Clark, who won the cup double with the Perth side back in 2021. This shrewd signing has proved to be a good bit of business. Hearts have had injuries to contend with this season, no doubt every team will say the same, but with Europa Conference League group-stage football added to the mix, the squad has been put to work.

Two wins over Latvians RFS earned the club prize money, but they found Fiorentina and Istanbul Basaksehir a step up in class. The worry for Robbie Neilson prior to taking part in Europe would have been the potential impact on their league form. However, going into 2023, Hearts are third, three points ahead of Aberdeen who have played a game more. This will give confidence to Hearts that another third-place finish is on the cards especially as Neilson will feel there is more to come from his team this year.

When Lawrence Shankland joined Hearts, everyone knew they were signing a proven goalscorer but with 16 goals already, he looks certain to become the first Hearts player to score 20-plus goals in a season for the first time since 1992. Club legend and leading all-time goalscorer John Robertson was the man to do it 31 years ago.

Robertson is also the record goalscorer in Edinburgh derbies against Hibernian with 27 to his name, so just the 26 to go for Shankland after his goal at Easter Road in August if he’s to equal another landmark in the future.

Fresh from his winner against St Johnstone on Wednesday, Barrie McKay will also be a threat to the Hibernian defence on Monday, while Robert Snodgrass will add to his vast experience in England and at international level with his first taste of an Edinburgh derby.

It has not been perfect from Hearts this season and losing Gordon is a big blow, but they will be content with where they are and the progress that has been made in 2022.

The same can’t be said across the city. When I wrote a piece looking ahead to the first Edinburgh Derby of the season back in August, I highlighted the recruitment and how crucial that was going to be.

Any new manager wants his own players in to play his own style and Lee Johnson discussed the process with me in July when asked how recruitment works at the club. “We get the budget from the owner, the CEO controls the budget in conjunction with myself and Ian Gordon (head of recruitment and son of owner Ron Gordon),” he said.

“All the player ID and the final say comes from me, but it has to fit the financial parameters of the club. There is a lot of good work going on here, the recruitment team is vast.”

Of those who started against Celtic on Wednesday, David Marshall and Elie Youan were the only summer signings to begin the game. The other starters were at the club when Jack Ross and Shaun Maloney were in charge. That would suggest the summer signings are taking their time to adapt or are not good enough.

Marijan Cabraja seemed to start steadily enough but has struggled recently and no doubt the passing of his father in August has been very difficult to cope with. Midfielder Nohan Kenneh has not been able to hold down a starting role on a regular basis. Jair Tavares, signed from Benfica B, last started against Livingston on matchday three. Meanwhile, Aberdeen signed Luis ‘Duk’ Lopes from the same club to greater success.

Momodou Bojang’s loan move from The Gambia’s Rainbow FC will come to an end early too after no goals and a struggle to adapt. Harry McKirdy has also yet to contribute. 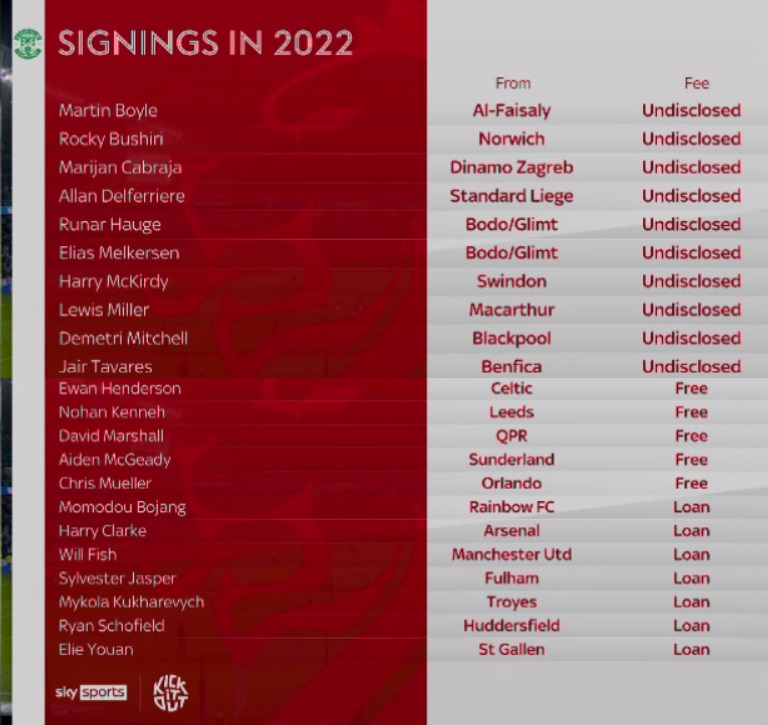 Others have been shipped out on loan and look unlikely to make an impact on their return. Aiden McGeady was injured early in the season, and it remains to be seen if he still has the magic he often showed with Celtic.

Following Wednesday’s defeat to Celtic, Johnson looked ahead to 2023 and told me, “We need transfer windows because we need to bring in players that fit my playing style. Sometimes when managers change quickly you can end up with three or four different sets of players that belong to different managers and philosophies. It is important we get that right and we haven’t always got it right if I am honest, but it is something we are looking to improve.”

Could the answer be closer to home?

The recruitment has been questionable, with many players coming in in 2022 and the strategy is not working as well as it should. The squad is bloated which will be costing the club money. It is a squad and wage bill that needs to be reduced. Hibernian don’t need project players. It is good to see the club is willing to explore different markets to try and unearth a gem, but they rarely come off and the club can’t keep taking a punt.

Maybe they should look closer to home. They have a youth team who won the Scottish League last season and have made it through to the UEFA Youth League play-off round where they will play Borussia Dortmund at Easter Road in February.

It is always a risk throwing in young players and it might not help managers who need to win games but there needs to be a pathway, something Josh Doig has recently shown can happen at the club. He now plays in Serie A with Hellas Verona and earned the club a good transfer fee.

Who could inspire Hibs at Tynecastle? 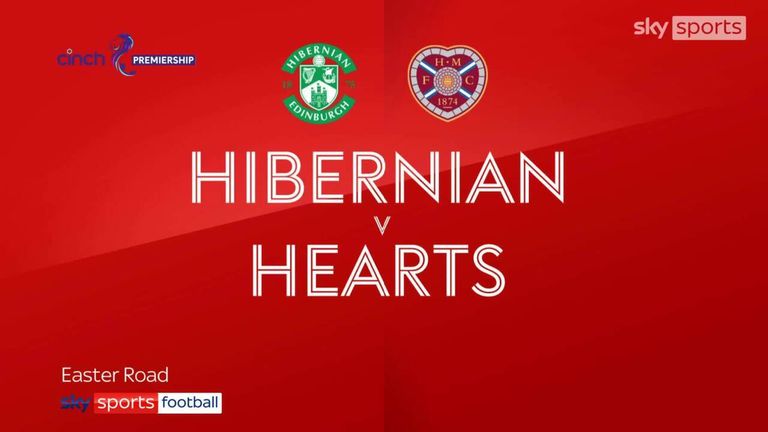 The return of Martin Boyle was met with delight among the fans and his instant impact in August against Hearts, scoring an injury-time equaliser on his second debut, showed what Hibernian were missing while Boyle was in Saudi Arabia. His injury, that saw him miss the World Cup with Australia, will see him on the sidelines until the start of next season, which is a blow.

Marshall has been made club captain and his experience is vital. He proved in the last meeting with Hearts that he can come up with top saves and kept out two Livingston penalties on Christmas Eve. Ukrainian loanee Mykola Kukharevych has potential but is raw, there is also a player in Elie Youan but he needs to improve his decision-making.

Let’s be fair, players need time to adapt when moving to a new club and country. Time is something managers have not been shown recently. Reaching the League Cup final couldn’t save Jack Ross his job and Shaun Maloney lasted just four months.

Johnson might only have been appointed in the summer, but a patchy run of form has not helped him with just two wins in 10 games. He only has to ask his predecessor what implications losing two Edinburgh derbies in the same month has. The two clubs meet again in the Scottish Cup on January 22 at Easter Road. So victories in this fixture are vital both to those in the stands and the boardroom.

The return of Kevin Nisbet in attack has certainly been a boost. His goals against Rangers and Livingston show he is sharp and still has a keen eye in the box following a bad knee injury that has kept him out since February. The onus and burden will be on him to get on the scoresheet. 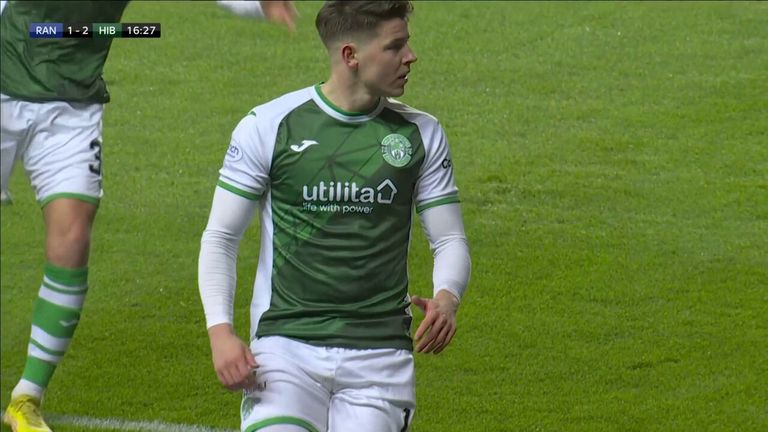 Nisbet scored on his return from injury against Rangers

New Year’s Day marks the 50th anniversary of one of Hibernian’s greatest games in their history.

While January 1, 1973 saw Conservative Prime Minister Edward Heath take Britain into the European Economic Community, at Tynecastle Park, Eddie Turnbull’s team were making the date a landmark on the football field. Hibernian thrashed Hearts 7-0 to take them top of the old Scottish First Division just three weeks after winning the League Cup for the first time. While Turnbull could boast of players like Pat Stanton, Alex Edwards, John Blackley and John Brownlie to name but a few, Lee Johnson can’t call on that quality. A win by the odd goal will be enough to start 2023 with a bang.

Hearts are unbeaten in the last seven meetings and go into this one in better form than their city rivals. The home fans will expect another victory.

With the traditional New Year celebration returning to Edinburgh this year after the Covid-19 pandemic, the result of one of the oldest derbies in the world will determine which side of the city will have a Happy New Year.