A mid-range smartphone that defines elegance in its segment- Technology News, Firstpost

Cons
– Bloatware
– No OIS in any of the cameras

Realme is positioning the 10 Pro+ 5G as a device that gives you the premium feel of a flagship device but at a mid-range budget.

The Realme 10 Pro+ 5G is feature loaded, has some pretty solid specifications, and certainly has the aesthetics to get people talking. However, there are a few flaws as well. So how does the Realme 10 Pro+ 5G fare, and more importantly, should you buy one if you’re in the market, looking for a smartphone?

Realme 10 Pro+ 5G review: The design
The Realme 10 Pro+ 5G is one of the best-looking devices that has been released this year. You get to choose between three colours – Hyperspace Gold, Dark Matter, and Nebula Blue. Out of these, the Starlight colourway in particular is the one to go for. Our test unit had the Nebula Blue colourway, which also looked very chic and astute. 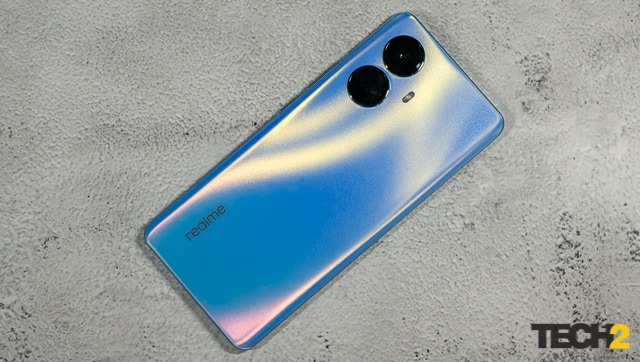 The rear panel is made out of plastic, but because the ocean colourway has a matte-like finish, it isn’t a fingerprint magnet. Thanks to some clever trickery in the manufacturing process, the back panel of the Realme 10 Pro+ 5G in the ocean colourway, catches the light in a unique way which gives it yellowish streaks, which complement the blue base colour. Underneath the display, we get a hole punch that houses the front facing camera. We also get some very thin bezels, almost non-existent, especially on the sides.

The side bezels are as thin as 1.41mm, whereas the bottom bezel is only 2.33mm thin. We’re pretty sure that these are the thinnest bezels in a mid-range device. The thin bezels along with the curved display, at such a low price, is possible thanks to a new packaging process that Realme is using, called COP ultra.

On the right, we get to see the power buttons, as well as the volume rockers. The left side has no buttons, and the top edge has an array of mics. At the bottom, we see a speaker grille that houses one of the stereo speakers, as well as the USB Type-C port. We also get to see the dual-SIM slot at the bottom. Unfortunately, the Realme 10 Pro+ 5G does not have a microSD card slot.

The three rear cameras are housed inside two gigantic islands, which actually gives the device a premium and somewhat minimalistic appeal from the rear. The top island houses the primary 108MP sensor, whereas the bottom one houses the 8MP ultrawide and the 2MP macro sensors. Despite its feather-like weight, and slim design, the Realme 10 Pro+ 5G  is built like a tank and feels solid to hold. All in all, as far as aesthetics are concerned, the device is a thing of beauty.

Realme 10 Pro+ 5G review: The display
Apart from the design and the aesthetics, the display of the Realme 10 Pro+ 5G  is clearly one of the best things about the device and the thing that really draws your attention. The Realme 10 Pro+ comes with a 6.7-inch FHD+ curved AMOLED display with a resolution of 1080X2412 pixels in a 20:9 aspect ratio. The display supports a refresh rate of up to 120Hz, which, along with the 360Hz touch sampling response, gives users a buttery smooth experience. In an industry first, the device also gets a 2160Hz PWM dimming mode which helps the display maintain colours more accurately even at low brightness levels.

The display comes with an HDR10+ certification and has a peak brightness of 950 nits, which means the display is vibrant, sharp and very clear, even under direct sunlight. It also has a contrast ratio of 5,000,000:1 and supports 10-bit colour support. which should give you an idea of just crisp and vibrant the display gets.

And, if in case you want the display to be even more vibrant, there is HyperVision mode which offers both Video Color Boost and Video HDR Boost.

Realme says that they have spent over $15 million on developing the display, and it shows. By far, it is one the best displays out there in this budget. The display also comes with hardware-level low blue light certification. Moreover, this is the world’s first OLED display to get the Rheinland Flicker Free Certificate. We also find an in-display fingerprint sensor, which is blazingly fast, does not miss and has some pretty cool animations.

Coming to the curved glass, we have a curvature of 61 degrees. And while curved displays have been plagued with false touch issues, Realme has mitigated a lot of those problems thanks to the X-touch Anti-mistouch Algorithm, which increases the anti-mistouch area by about 20 per cent. As opposed to the number of mistouches we have had with more premium smartphones with a curved display, mistouches were very rare, almost negligible.

Realme 10 Pro+ 5G review: The camera
The Realme 10 Pro+ 5G gets a triple camera setup at the rear, which has been housed in two separate rings. The topmost ring has the primary camera with a 108MP sensor. Then there is the 8MP ultrawide camera and a 2MP macro camera which have been placed in the other ring. For the front-facing camera, we get a 16MP sensor with a Quad-Bayer colour filter.

Thanks to 9:1 pixel binning, the 108MP sensor gives us amazingly crisp 12MP shots, with plenty of details, some really good colours and a pretty decent dynamic range. If you’re hardcore photography and filmmaking, the Realme 10 Pro+ 5G’s camera will still impress you. The default 12MP photos that you get from the device are joyful to look at.

Shots that are taken with the main 108MP sensor in the daylight are phenomenal, especially when you compare them with photos from most other mid-range offerings, We only wish that we would have seen some form of OIS, at least on the primary sensor. Having said that, we never felt that we were desperately missing any advantage that an OIS would have added.

The night photography capabilities on the device are impressive. In the Night Mode, we get a little more details than most other smartphones in this range, and beyond. The grain in darkly lit photos are cleverly managed as well. We also loved playing with the street photography mode.

As for the front-facing camera, the device gave us some pretty decent shots, considering the price. The fixed-focus camera gives us plenty of details, and the colours are pretty accurate as well. However, there is some noise in the images.

Click here for some unprocessed and uncompressed images from the Realme 10 Pro+ 5G.

Realme 10 Pro+ 5G review: The performance, software experience and UI
The Realme 10 Pro Plus 5G is a rather capable smartphone thanks to the MediaTek Dimensity 1080 5G SoC powers. The 1080 SoC is a refined and slightly modified version of the MediaTek 1000 SoC and still functions rather well compared to other SoCs found in most smartphones at this price point. Our test unit had 8GB of LPDDR4X RAM and 128GB of UFS 2.2 internal storage. Additionally, you can add another 8GB to the RAM thanks to the virtual swap memory function.

Given that this is not a top-tier flagship device, the scores that it gets in benchmarks do not break records. However, in our day-to-day usage, which involved some pretty intense gaming sessions and quite a bit of multitasking, it did really well. 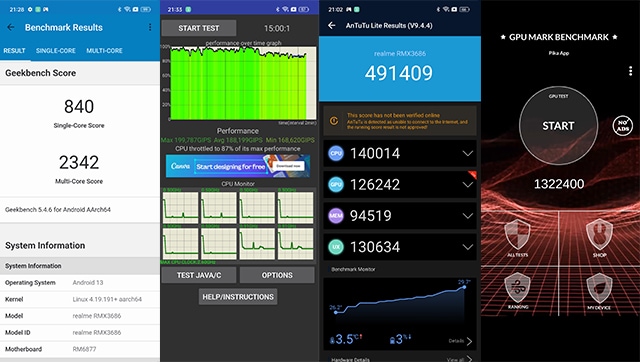 The device handled games like Asphalt 9 and Call of Duty Mobile very easily. We were able to play these games at the highest graphic settings, at 60fps, without any issues. 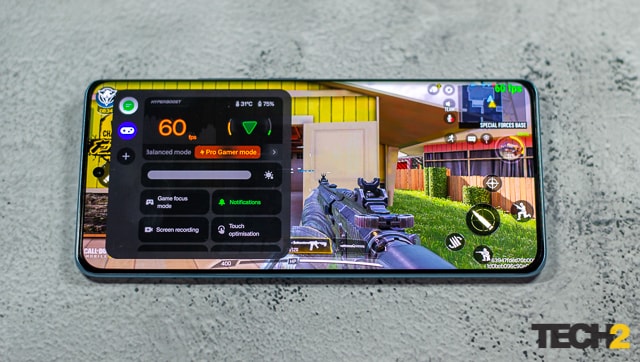 The Realme 10 Pro Plus 5G runs on RealmeUI 4.0, which is based on Android 13. You get Android 13 straight out of the box, so that’s a massive plus. It gets a ton of neat features, but and is very easy to customise, easy to use, and is actually intuitive.

Among the added features, we really liked the Dual Mode audio, Sleep Capsule, and Heart Rate Measurement although the reading may be slightly off. Another cool feature that we really appreciated was when the device automatically blurs sensitive information when you take a screenshot in WhatsApp or Messenger.

As for connectivity, the Realme 10 Pro Plus 5G comes with WiFi 6E, BlueTooth 5.2 and USB Type-C 2.0 port. The device also comes with both SA and NSA bands, for a total of 11 5G bands. It also has some other features like HyperSmart Antenna Switching, which helps it get better connectivity.

During our 5G tests, we were easily getting about 400-500 MBPS at about 500 metres away from a tower, behind a lot of buildings and shrubbery. Furthermore, the battery during our half-hour testing, during which we saw a couple of videos and had a short gaming session of Call of Duty Mobile, saw the battery dip ever so marginally.

Realme 10 Pro+ 5G review: The battery life
Speaking of battery life, the Realme 10 Pro+ has a 5000mAh battery. Because the device uses an SoC that has been highly refined, along with an OS that is highly optimised, battery life is phenomenal. In an hour of heavy gaming, and watching a lot of videos, while using the inbuilt stereo speakers and the display set to 75 per cent screen brightness, we used about 13-15 minutes per cent of the battery. 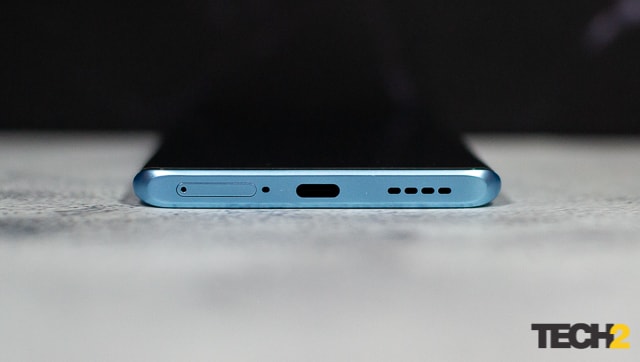 You’ll easily get over 10 hours of screen on time at 70 per cent brightness, and over 16 hours of usage time. Our typical usage included watching videos, browsing the internet, some amount of gaming, going through emails, conference calls with the office etc.

The Realme 10 Pro+ also has SuperVOOC wired charging at 67W. During our tests, we found saw that the device charges from zero to 55 per cent in less than 20 min. It took the device about 50 minutes in total to go from zero to a 100 per cent charge.

Realme 10 Pro+ 5G review: The verdict
For a device that costs Rs 25,000 or perhaps even less, depending on when you’re in the market for a smartphone, the Realme 10 Pro+ ticks a lot of the correct boxes, and creates a few new ones that budget smartphones should be judged upon. Realme is indeed going to end the year on a high note, thanks to the Realme 10 Pro+. It is a bit uncanny that a budget device like this, looks so cool, and feels so good in the hand, that you almost mistake it for a premium, flagship smartphone. The curved AMOLED display, further adds to the charm, as well as the illusion that this is a premium smartphone.

Yes, there are flaws. We wish that Realme would do something about the bloatware. Performance, even though not chart-topping is still solid, and not something that you can complain about not realistically at least. However, unless you’re a pro gamer or an ultra-heavy user, you won’t find issues with the performance of the phone.

Overall, the Realme 10 Pro+ 5G is a great device, one that definitely hits the sweet spot. We can confidently recommend people to go for this device if they are in the market for a midrange smartphone.

Moonrock Labs brings together brands and developers for metaverse experiences